I was recently recommended as a pinch-hitter keynote speaker for a Linux conference by a friend who wasn’t going to be able to present due to a scheduling conflict. She put me in touch with the conference organizers, and they reached out to me with the exciting email subject “We want YOU to keynote [conference name]!!”

I’ve been doing a lot more speaking in the past year, and was happy to step in to help out. Speaking at conferences makes me enormously uncomfortable, but I’ve been told I’m good at it, and I promised myself a long time ago that I’d never say no to an opportunity just because I was scared.

I replied to the conference organizers with an introduction of my background, and the types of things I usually speak at conferences about: programming, risk, security and privacy, and empathy, mostly. (A weird mix, I know, but that’s my jam.) I provided samples to some blog posts and speaker decks they could take a look at to see what might work for them.

They replied (politely) that they were hoping I would talk about increasing the number of women in technology.

I replied (also politely) that I don’t typically present on women in technology issues, and asked how they would feel about  a “diversity in tech talk”, instead of one aimed just towards women in tech, since my position tends to be one that empowers all that feel disenfranchised, not just women. It’s definitely not the talk I would have wanted to give at a Linux conference, as diversity in tech is something I care about but I’m far from an expert on it. When I’m speaking at a technology conference, I prefer to talk about, well, technology. But I was trying to be flexible, out of respect for my friend who had recommended me.

I received an email reply shortly after that explained that they “decided to go another way” with the keynote – and the “other way” was apparently finding another woman to keynote about gender diversity in tech.

This is their conference, and they certainly have a right to stay focused on what they want to accomplish with it (although I admit I don’t understand how diversity in tech – which includes women – would be contrary to that).  Maybe they found a speaker more qualified to talk about women in tech. It wouldn’t be hard to do, since I have literally never presented on women in technology in my almost 20-year career, but it seemed like a pretty abrupt gear-change given their initial enthusiasm.

The assumption that of course I’d want to talk about women in tech “because VAGINA!” is incorrect, and I find it a little bit shitty, to be honest.

This isn’t the first time something like this has happened, and something tells me it won’t  be the last.

When I present, I present about technology. There mere fact that I have a vagina does not make me qualified – or interested – in presenting about women in technology. I am absolutely not criticizing the women that do choose to present on this topic. I think their work is important and valuable – it’s just not my thing.

My position is that the best way for me to be a role model for women (and men) in technology isn’t to give talks about being a woman in technology, but to kick ass and take names at being a technologist, and to give great presentations on technology topics. This is my way of showing men and women in technology that women are as capable and badass as the bros.

It’s the same reason I always agree to speak at conferences even when I know I’m a token.  I frequently spend my own money to fly out to speak at conferences that can’t afford to fly me out or cover my hotel, and I do this because it’s important for men and women to get used to seeing women at the podium, demonstrating their skills as an authority in technology. If we can get a few more women on that stage, maybe we won’t feel like such a rarity anymore, and the perceptions of us in technology will shift.

Women are not psychically connected at the fallopian tubes, and my experiences in tech will not reflect the experiences of a vast majority of other women in tech.

I’m happy to talk to you about my thoughts on gender and equality issues. I’d love to grab a beer with you and tell you my experiences, and relay the experiences relayed to me by my fellow chicks in tech. I’ve even been known to get a little ranty about it on the Twitters, and occasionally blog about it. I care deeply about diversity and equality, but I want to level the playing field in society, not just in tech. And not just for women.

Simply being a woman in technology doesn’t automatically make you qualified or interested in presenting about women in technology. It’s not some sort of ZOMG Uterus! club, and the assumption that it’s the only thing I’d be useful at talking about is a problem for me, regardless of how well-intentioned you are in wanting to bring this topic to the forefront at your conferences.

If you want women to feel less like outsiders in technology, try having a few of them speak at your conferences about *gasp* technology.

So yeah, I’ll be your token for now. But I will not give a presentation on women in technology. 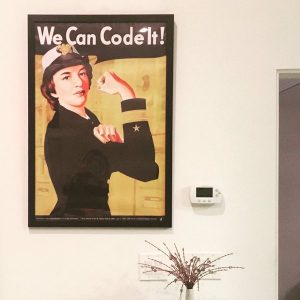 (The attached poster hangs in my living room, and was sent to me by the lovely @jzy from @StackExchange. It is amazing, and I love it.)